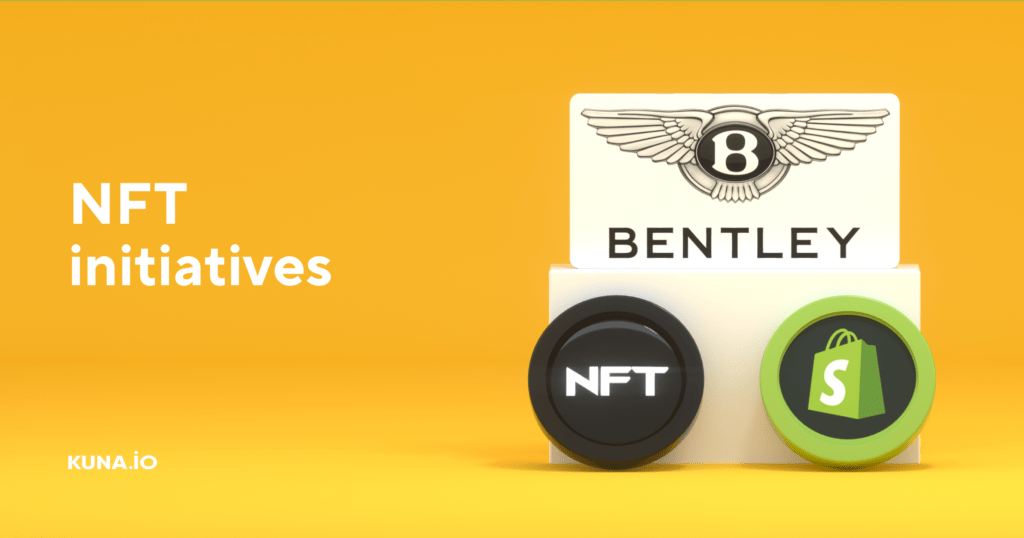 The ongoing crypto fall could not but affect the NFT industry since most of the tokens are bought with Ethereum. The media reports that in April 2022, the cost of NFT tokens fell by an average of 70%. For example, Bored Ape YC was worth $359,968 a month and a half ago, while as of June 13, it costs $87,951. Nevertheless, celebrities and companies continue to launch new NFT initiatives even during the bearish trend.

Premium car manufacturer Bentley has announced the release of its limited collection of 206 tokens as early as September of this year. Genesis Bentley NFT will be a unique work of art and provide owners with unique access and exclusive rewards. The drop will take place in the Polygon network. This initiative also aligns with the company’s goal of achieving complete carbon neutrality by 2030.

Shopify, a software developer for online and retail stores, has announced an expansion of NFT functionality. Clients can now connect their crypto wallets to shops on the platform to verify ownership of non-fungible tokens. Upon activation, users can access pre-sales, exclusive content, or merchandise. This feature has already been beta-tested within a limited group but is now available globally to all merchants.

Why create NFT services from scratch if you can simply buy a ready-made company —  probably, thought eBay management and acquired the KnownOrigin platform. The deal was concluded on June 21, but its details were not disclosed. KnownOrigin stated that this collaboration would allow for more active development in the Web-3 technology industry. Please note that in the spring of 2021, eBay first allowed its users to trade NFTs.

Celebrities do not miss the opportunity to collect hefty checks from digital giants. World-famous soccer player Cristiano Ronaldo has partnered with the Binance exchange to launch an exclusive collection of non-fungible tokens on the Binance NFT platform, scheduled for the end of 2022. The details of the collection are not yet available, but the company said that the tokens would be created in personal collaboration with Cristiano.

🤔Do you think the NFT market will survive the current downturn? Will the industry matter in a year or two?