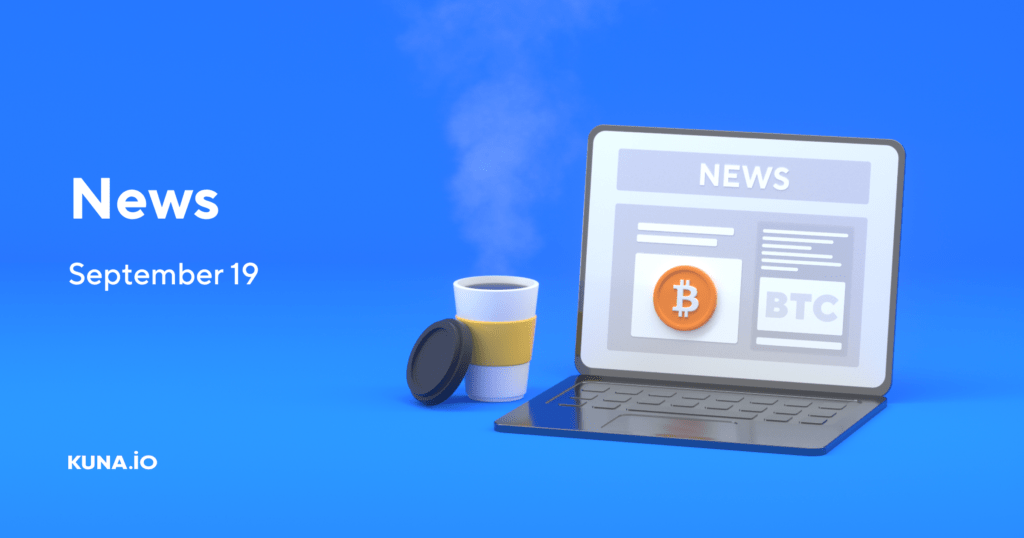 Talking about the most important events in the cryptocurrency world over the last week.

✅ BTC is trading below $19 thousand

Bitcoin started the week from a price that exceeded $21.5 thousand, but already on Tuesday, September 13, the quotation began to fall, which brought it to a position below $19 thousand. According to the experts, the fall is due to the update on inflation data in the United States.

At the same time, Ethereum experienced a significant drop of more than 20%, the altcoin SHIB also lost about 15%. And only the XRP coin price, which trades in Kuna, has shown solid growth over the past week against the top coins, but has also entered the red zone at the beginning of the current week.

On Thursday September 15th, the cryptocurrency market faced a historic event. The blockchain of the second world cryptocurrency Ethereum has changed the Proof of Work algorithm to the Proof of Stake. The long-awaited merger occurred without any errors, allowing the network to upgrade successfully.

With the ETH transition to Proof of Stake consensus, the system has reduced energy consumption by 99%. But the market reacted negatively to the transition, which led to a fall in the quotes of the world’s second cryptocurrency. Back on Monday September 12th, ETH was trading at over $1,700, and as of this writing, the price has dropped below $1,400.

✅ DOGE is in the TOP 10 cryptocurrencies

According to CoinMarketCap, Dogecoin (DOGE) currently has a market capitalization of over $7.9 billion, surpassing its tenth-place predecessor Polkadot (DOT) with its current $7.7 billion capitalization.

Probably, the relative increase in the capitalization of DOGE may be related to the news about the sale of the new Cyberwhistle by Tesla. The manufacturer insisted on buying the whistle only using Dogecoin, and according to open sources, the product was sold out in the shortest possible time.

The White House published recommendations based on a digital sector study that lasted 6 months. The first comprehensive concept for the digital assets development contains conclusions and recommendations issued by federal agencies as a result of studying the crypto market.

Published on September 16, the document contains 7 main points, from protecting consumers, investors and businesses, ending with the study of the US Central Bank Digital Currency (CBDC).

✅ SWIFT is testing the possibility of using Blockchain

The system of international bank transfers SWIFT initiated a study of the possibilities and prospects of using blockchain technology for information sharing. The director of innovation at SWIFT noted that combining the Symbiont platform and smart contracts with the SWIFT network will make it possible to automatically coordinate data from several corporate sources and transfer them to their destination.

Stay tuned for new KUNA News posts. We are covering the most important events in the cryptocurrency market. Keep in touch with us 👌