​​🏦 How Does the Fed Rate Affect the Value of Cryptocurrencies? 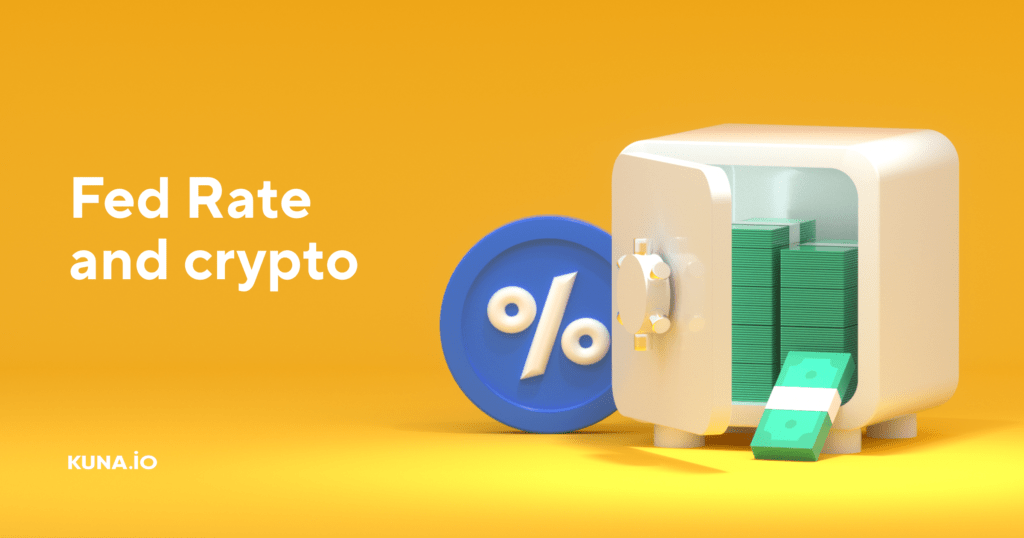 Often, you can find news about the rise or fall of the digital currency market after statements or specific actions by the Fed. And lately, the community has been discussing interest rate hikes and the reduction of the U.S. central bank’s balance sheet.

Let’s learn how the cryptocurrency market is affected by the actions of the U.S. Federal Reserve System.

What Does the Fed Funds Rate Mean ❓

The federal funds rate is the lending rate banks use to lend short-term loans to each other. It is the primary measure of U.S. financial policy. Its change significantly impacts the monetary system and is reflected in the price of various financial assets (including cryptocurrencies).

How the Fed Rate and Riskiness Are Related ❓

Each asset has its own degree of risk. Risk assets have floating returns that depend on market conditions and investor behaviour. There are also low-risk assets that offer low yields but generally stable prices.

Bitcoin belongs to the first type of value. Although it does not have a well-defined status, BTC behaves as a volatile and high-risk asset whose value coincides with the dynamics of traditional markets.

Why Bitcoin’s Value Changes When the Fed Rate Changes ❓

Because of its significant capitalization, Bitcoin is highly correlated with traditional financial markets (especially stock markets). Therefore, cryptocurrency investors cannot ignore the actions of central banks, one of which is the Federal Reserve.

When the Fed raises funds’ rate, the value of BTC falls. During an economic recession or crisis, when personal and corporate lending rates go up. Investments become more expensive, and the economy slows down, so investors sell high-risk assets and invest in conservative instruments such as government bonds.

When the Fed lowers the funds’ rate, the regulator starts buying assets on the public market and replenishing its own balance sheet. Thus, lending rates fall, and the investment climate improves. It, in turn, motivates investors to diversify their own portfolios by buying high-risk assets, which include Bitcoin.

Will Bitcoin Remain a Risky Instrument ❓

No economist can give a definitive answer to this question so far. However, many researchers have noted a correlation between BTC and gold, one of the most popular low-risk assets.

Dan Morehead, the founder, CEO, and CIO of Pantera Capital, believes that the Federal Reserve is deliberately manipulating the market by purchasing a significant amount of distressed assets. It has led to problems in three U.S. markets: labor, government bonds, and mortgage lending. And the issues in the U.S. economy will undoubtedly affect the rest of the world.

Besides, the only problem with Bitcoin, according to Morehead, is the growing correlation with other high-risk assets (including the S&P 500 during the index downturns). But this situation can hardly be called a permanent phenomenon so far. The founder of Pantera Capital is confident that traditional assets and digital currencies will ultimately go their separate ways sooner or later.