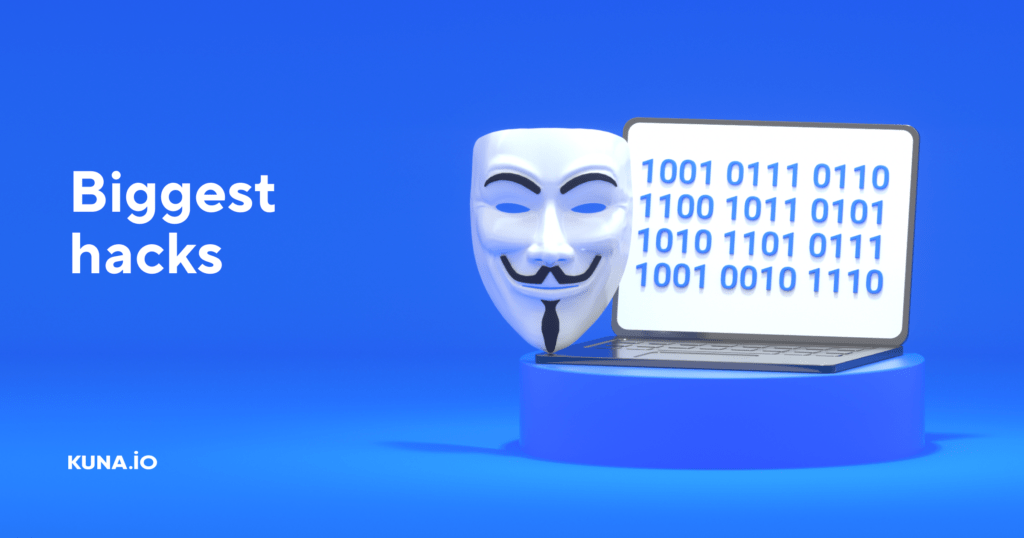 We always say that the security of your crypto is the first thing to take care of. New data for 2022 has once again proved it: in the first two quarters, hackers stole cryptocurrencies worth up to $2 billion.

According to FinanceYahoo, investors lost $1.2 billion in the first three months due to hacks, which is eight times higher than in 2021. Altas’ analysts concluded that hackers stole $2 billion in the year’s first half.

Chainalysis also notes that DeFi protocols are the primary target, amounting to 49 out of 50 hacks in the second quarter of 2022. Let’s take a look at the most notorious crypto heists of 2022!

At the end of March, the Ethereum sidechain Ronin, created for the popular NFT blockchain game Axie Infinity, was hacked. The attackers stole over 173,600 ETH coins and $25.5 million in USDC for a total of $620 million. According to the official report, they managed to access the private keys of 5 out of 9 validator nodes, which is a necessary threshold for confirming a transaction.

Interesting fact: the attackers hoped to earn even more by shorting the Axie Infinity native token. The calculation was that the news about the hack would lead to a dramatic rate decrease. Unfortunately for them, the short position was liquidated before the media trumpeted the incident.

On February 3, hackers attacked the Wormhole cross-chain protocol based on the Solana network. They managed to withdraw more than $319 million in WETH tokens from the project pool. According to the CertiK report, the attackers ended up with at least $251 million in ETH, nearly $47 million in SOL, and more than $4 million in USDC. Using the exploit on the Solana side of the Wormhole cross-chain bridge, they created 120,000 so-called ETH (WETH) wrapped tokens, and then exchanged them for ether.

Interesting fact: less than a day after the attack, Jump Trading, the parent company of Wormhole, transferred 120 thousand ETH to the pool to reimburse the stolen assets.

In April 2022, a hacker used a flash attack and stole $182 million in Ethereum, the BEAN stablecoin, and other assets from the Beanstalk protocol. They used flash loans to purchase a large amount of BEAN tokens. After gaining control of the network, hacker withdrew more than $180 million from the protocol.

Interesting fact: out of $180 million, the attacker received only $80 million. The rest of the funds were spent on loan repayments and conversion. The remaining funds were mixed through the Tornado Cash service for anonymity.

🤔Have you ever lost crypto due to hacks or scam platforms?